Get the latest news & developments in chiropractic technology

The Importance of Non-Pharmacological Pain Treatments

Patients are constantly seeking out non-invasive and non-drug therapies. Among the top reasons are costs that come with invasive or drug therapies, the associated recovery time, and overall safety. While seeking “alternative”, or traditional, care is often positioned as a personal choice, not a medical one, the sheer number of lives that are being lost to the opioid crisis in the United States has made the accessibility and acceptance of non-pharmacological treatments and therapy, a systemic imperative. But what is our role as healthcare professionals?

The public health crisis known as the Opioid Epidemic began in the late 1990s, when pharmaceutical companies insisted that opioid painkillers were non addictive and as a result healthcare professionals began to prescribe them widely. They were, as it turns out, hugely effective in treating pain symptoms, and for certain populations such as the elderly, a lack of other effective pain reduction drugs made opioids even more attractive. However, the assertions that opioid painkillers are non addictive was— to put it lightly— wildly inaccurate, and today, an estimated 20% of Americans over the age of 12 have used prescription painkillers for nonmedical use. The US Department of Health and Human Services declared the opioid crisis a public health emergency in 2017. 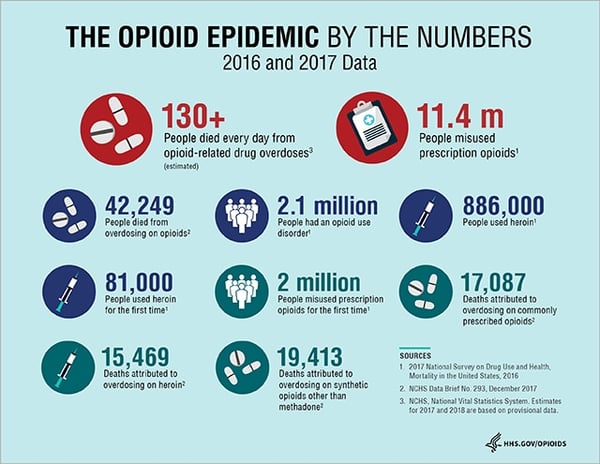 Sourced from US Department of Health and Human Services

As part of the declaration of a public health emergency, the HHS released its five-point plan to combat the opioid crisis, which includes:

These five priorities are powerful because they address all the different facets of the opioid crisis, from healthcare professionals to politicians to the individuals impacted by addiction. We all have parts to play in order to halt this epidemic, and becoming champions of non-pharmacological pain treatments and non-pharmacological therapy is an initiative with which we can make an immediate and profound impact on our patients’ quality of life.

What are Non-Pharmacological Pain Treatments?

The question of what non-pharmacological pain treatments entail is simultaneously trivial to answer and impossible to fully encompass. Managing pain without pharmaceuticals can leverage everything from therapies to behaviors to better education, and the strategies used are highly dependent on the person being treated and the conditions from which they are suffering. Anything that effectively reduces pain without the use of drugs can be considered a non-pharmacological pain treatment, with some being more technical and evidence-based than others. Some include:

In addition, many people in the medical field are stressing the need to move beyond non-pharmacological pain relief to non-drug and non-invasive healing treatments as a first option. For example, the Oregon Health Plan, which is the state body that administers Medicaid and Medicare in for Oregon residents, moved to cover non-pharmacological treatments for back and chronic pain in July 2016, which included coverage for yoga, massage, chiropractic services, and supervised exercise therapy, among other treatments. Further, in the case of some conditions and patient backgrounds, these treatments are to be considered and pursued before a drug-based intervention.

What Healthcare Professionals Can Do

It’s certainly no secret to the medical community that the overprescription and misuse of opioid painkillers has had catastrophic consequences, but addressing the issue goes beyond simply cracking down on prescriptions. Indeed, according to a study on the patterns of opioid prescription in emergency care doctors, there is simply too much incentive–both financial and emotional–for many doctors to prescribe opioid painkillers rather than opt for a slower-acting, non-pharmacological pain treatment and therapy. But while patients may feel temporary relief from pain symptoms with opioid painkillers, evidence from the same study shows that a single exposure to them could lead to long-term abuse.

The first step for healthcare professionals is to think critically about the role of opioids in their practice. The second is to make other pain treatment options available to their patients. Whether that involves investing time and capital into a new, non-drug treatment or building a broader network of care providers to whom patients can be referred for individualized approaches to pain relief, every individual in the healthcare community can make a difference in their practices to join the fight against the opioid epidemic, and hopefully, save a life from addiction.

Chiropractic treatments like spinal decompression therapy are evidence-based with proven results. Take another look at SDT with our free download.